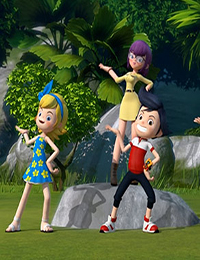 'Baryon', the great Dino Master of Dino Star, is defeated by the evil 'Darkno'. Before he dies, he sends his three most trusted DinoCores: Tyranno, Saber and Stego, to Earth with the ancient guardian Dino Tuner. Many years after Baryon's defeat, a carefree boy named Rex comes across the Tuner and becomes the new Dino Master. Meanwhile, Darkno takes over one planet after another and finally reaches Earth