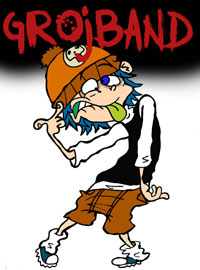 Grojband follows Corey and his three best friends, Laney and twin brothers Kin and Kon, as they work to propel their garage band to international stardom. When they don't have the lyrics, Corey and his friends get Trina into an emotional diary mode to write lyrics in her diary, so that Corey and his friends can perform a perfect song.Grojband is a Canadian animated series developed by Fresh TV and distributed by FremantleMedia, Ltd. (FME). The series is created by Todd Kauffman and Mark Thornton, and co-directed by Kauffman and Thornton. Executive Producers are Tom McGillis, Jennifer Pertsch, creators of the hit animated reality franchise Total Drama. The series is rated C8 for most episodes (except for some which are rated G such as No Strings attached) in Canada and TV-PG in the United States. It is geared toward children ages 6 to 11. The series first aired on June 10, 2013 on Cartoon Network and June 25, 2013 on Boomerang in the United States and on September 5, 2013 on both of its original channels, Teletoon and Télétoon in Canada.

Grojband Episode 05 all you need is cake helmet

Grojband Episode 025 - The Curse of the Metrognome - Dueling Buttons

Grojband Episode 023 - For Hat and Country - It's in the Card