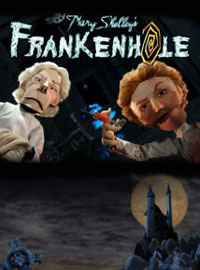 Mary Shelley's Frankenhole is a stop-motion animated TV series by Dino Stamatopoulos, creator of Moral Orel.[1][2] The series premiered on June 27, 2010 on Cartoon Network's late night programming block Adult Swim. The series ended on March 25, 2012 after two seasons with a total of 20 episodes. The second episode, "Mother To Be-Sa" was never aired on television and was never released to the public in any format.