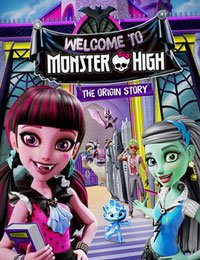 A vampire named Draculaura is narrating the story, talking about what is normal for some people, and not normal for others. She gets along well with Frankie Stein, who she makes a new school with, and meets a girl named Clawdeen Wolf, who becomes their friend. Along the way, they met a girl named Moanica D'kay, azombie girl who has an army of "zomboys" (zombies, male zombies) to use at her whim to get the world back from thehumans. Moanica is the story's main antagonist, and Draculaura and Moanica try to meet a human celebrity girl named Tash—who turns out to be a monster like them, a ghost girl named Ari Hauntington.