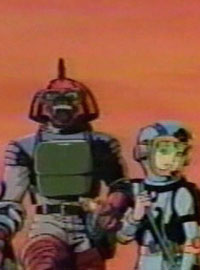 Jim Marlowe (voiced by Benny Grant), Jr., and his little sister, Phillis Jane "P.J." Marlowe (voiced by Haven Hartman), are teens growing up on the distant mining world of New Aries. Life on New Aries is difficult, with its surface being a red-colored desert. Along with the harsh climate and severe weather, there are many dangerous creatures living on New Aries, such as the three-headed Cerebus Hounds, the swift and voracious Water Seekers, and the misunderstood Locals, creatures so rare and dangerous they border on urban legend.