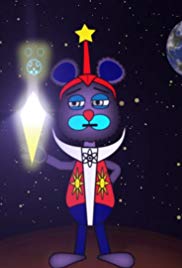 Space Bear and the Love Bomb

An evil black cloud of negativity is spreading through the Universe threatening its destruction. The good Space Bears of Planet Bearia have discovered its source......Earth. They send their famous scientist Bearian Starfish the Third (Angie Mavrakis) to construct a Love Bomb in order to detonate it and bring peace to mankind, stopping the black cloud in the process. Space Bear gets help along the way from his only human friend Randy (Michael Potter), a dim witted kid with a heart of gold who vows to stick by Bearian no matter what. Hot on their tail is an unscrupulous bounty hunter named Ricky Gitsburg (John Oathout) who will do anything to capture the alien in his quest for fame and fortune. Soon the FBI gets involved tracking the pair in the belief the two are out to construct a weapon of mass destruction. Space Bear and the Love Bomb is an animated science fiction adventure for all ages that carries a positive message of overcoming the evils of the world through the power of love.