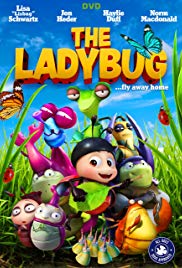 Seven-spotted ladybug Rube lives in a glass cage inside a greenhouse inside a glassy laboratory. He longs for legendary bug utopia Golden Canyon. When he helps dragonfly Master Water escape wasp guards that have chased him into the laboratory, he accepts the suggestion to travel together. But Master Water has no intention of going to Golden Canyon, and abandons Rube. At a nearby pond, a frog prince nearly swallows Master Water whole. Rube comes to his rescue, his parrying making the frog's lashing tongue become knotted in water reeds. When Rube sets him free, the frog sends his royal guards to escort them to a giant bird that flies over Golden Canyon. The giant bird is, in fact, an airplane. Jumping off the plane mid-route, they arrive at bug utopia only to find - a construction site. While scavanging for food, Master Water is captured by human kid Little Fatty, who collects bugs in a glass jar guarded by his pet lizard T-Rex. Rube comes to the rescue again, throwing himself against the jar with all his strength, knocking it off its shelf and knocking out T-Rex. When T-Rex regains consciousness, he starts to banquet on the fleeing critters only for Wasp Queen to arrive with her royal troops. Also duped by Master Water, she has repeatedly sent her guards to arrest him. But moved by Rube's go-it-alone courage, she now sends them to help. United for the first time, the bugs defeat the lizard, and together re-build their adopted homeland.