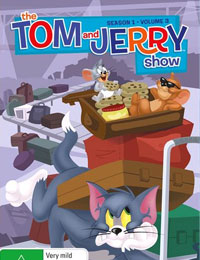 The Tom and Jerry Show Season 3

The Tom and Jerry Show is a 2014 American animated television series produced by Warner Bros. Animation and Renegade Animation, based on the Tom and Jerry characters and theatrical cartoon series created by William Hanna and Joseph Barbera in 1940. It had its world premiere on the Canadian channel Teletoon on March 1, 2014, and premiered on Cartoon Network in the United States on April 9, 2014.