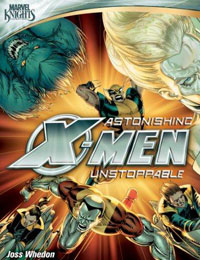 In the following Unstoppable arc, Whedon wrote an adventure taking place on the alien Breakworld. The X-Men square off against the Breakworld leaders, who are intending to destroy Earth by firing a giant bullet. The Danger subplot is also resolved, and Whedon established that Danger is hard-coded not to kill. In the end, Shadowcat phases inside the Breakworld bullet, and when it reaches Earth, makes it intangible, so that the bullet passes through Earth. However she is unable to remove herself from the bullet and vanishes with it into space.