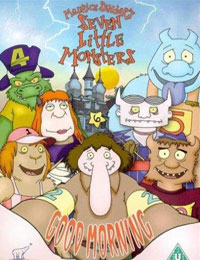 This children animated series follow seven little monsters, whom are apparently not little but big ones, in their adventures on learning about life. And each monsters' name is an number, 1-7. One, the eldest of all of them, as well as the most athletic and yet to be the tattletale of the siblings. Two, the most helpful out of the monster with a long nose. Three, the most dramatic of the seven, and usually seen taking on a different persona in each episode. Four, the middle child who is the epitome of rambunctious angst in his family. Five, the childish sibling who does weird things with his tongue. He usually seen with Four. Six, who is the resident ballerina, and believes she's the most beautiful monster. And the youngest, Seven, who can unscrew his head. Despite his frightful appearance as well as be the youngest, he is the tallest amongst his siblings and is the most gentle as well.

Seven Little Monsters Voyage To The Bottom of The Cereal Box

Seven Little Monsters The Mystery of the Missing Five

Seven Little Monsters Out of Sight

Seven Little Monsters Are You My Family