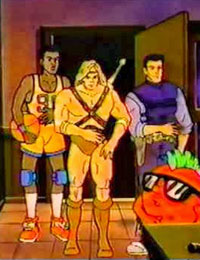 The cartoon show featured characters from Acclaim video games, although Acclaim never actually created these games, but merely published the home console versions. They included Max Force from NARC (originally an arcade game by Williams, ported to the NES by Rare), Kuros from The Wizards and Warriors series (originally created by Rare), Kwirk from the game of the same name (originally by Atlus), Tyrone from Arch Rivals (originally by Midway) and BigFoot from the game of the same name (developed by Beam Software, and based on the famous monster truck). The cartoon show also featured a cartoon version of the host of Video Power, Johnny Arcade, as they fought against villains from the Acclaim lineup, mainly Mr. Big from NARC, although Malkil from Wizards and Warriors or Kwirk's enemies from his own game occasionally appeared as wel